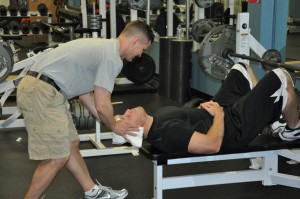 Some of this seems quite elementary, but a few of the videos posted on the Internet lately have made me feel like it’s worth going over. I hope that we can agree that the muscles surrounding the cervical spine should be strength trained. However, there’s been a lack of attention to important strength training principles in the examples I’ve been watching. It’s not good enough to just do it, it’s how you do it.

First and most important, be safe! There should be no acceptable room for error while performing a workout for neck strengthening.  Understand acceptable ranges of motion, loads, direction of loads, speed of movement and anatomy.  Cause no harm should be your motto when engaging in any neck strengthening program.  If you don’t know how to do it safely, don’t do it. Period.  Hurting your (or someone else’s neck) because of poor training is completely unacceptable.  Of course, accidents happen, and we can’t control everything, but do your best to understand what should and should not be done and always take care when performing any neck exercises.

Use rules of progression just like you would on any other exercise. Everyone has their rules for moving up in weight for their squat and clean, but what about neck flexion in the hammer 4-way neck machine? A 10-15 repetition rule will work well. Once the exercise can be completed for 15 or more repetitions with a certain weight, increase 2.5-5 lbs. for the next workout.

As a side note on progression, some of the literature is claiming that you should not train your neck to failure. I assure you, if you are performing the repetition correctly and the weight is appropriate for your rep-range, there is nothing wrong with demonstrating failure on a neck exercise.

You’ll never eliminate momentum when performing a repetition, but it’s important in neck training, to limit it. Emphasize the negative portion of the repetition when you’re training the neck. You can put great emphasis on it by giving a 3 second rule for the negative. The counting should be like this: One Thousand and One-One thousand and Two-One Thousand and Three. This rule can make your neck training safer and potentially more productive.

Along with taking your time to perform the negative, it’s important to pause in the contracted position of the muscle. For example, if you’re using a neck harness to perform a set of neck-extension, pause when your neck is extended at its end range of motion for a One Thousand and One count. Just like emphasizing the negative, emphasize the pause where there’s great tension on the muscles.

Train the neck comprehensively. There’s been plenty of talk lately on all of the movements that should be trained in order to train the neck the right way. Do some research and find out how you can work several different planes of movement for the neck, traps, and upper back into your workouts.

Be consistent when training the neck. It should be trained all year round, including in-season. Doing it in the off-season and pre-season is going to allow you to head into the season performing the same or similar exercises. Obviously careful and logical planning for an in-season neck training protocol should be well thought out.

Just like anything else you’re prioritizing, pay attention to the details and perform the exercises with purpose. Hurrying or slopping through a few neck exercises during the week so that you can report you’ve done neck training is silly and a waste of time.